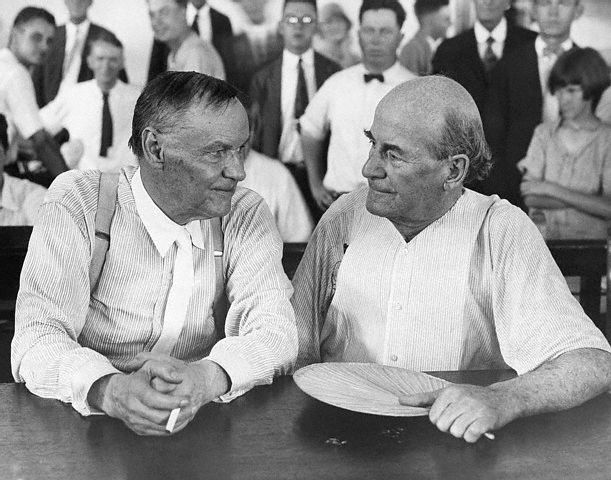 The scene is the railway station in Dayton, Tennessee, July 22, 1925—the day after the end of the Scopes trial. Darrow is alone on a platform, waiting for a train. Bryan quietly enters, walks toward Darrow, and speaks.

BRYAN.  “Now the Lord had prepared a great fish to swallow up Jonah. And Jonah was in the belly of the fish three days and three nights.” Oh, my! The fuss you made about that fish! The questions you asked me! “Do you really think God made that fish especially to swallow Jonah?” “Just how big was that fish?” Well, it’s a real fish, sure enough. And here we are, the two of us, smack dab in its belly, compelled by the Almighty to face our failures until we repent our hearts out.

DARROW.  I’m not repenting. And I’m not in a fish’s belly. I’m waiting for a train on a murderous hot day. I’m standing beside a man I thought I knew, and thought I liked, but I was wrong on both counts. I’ve spent a lousy week in a godforsaken Podunk which got stuffed to the gills with a thousand more stinking, sweating bodies than it was meant to hold, and all their skulls together don’t hold a fraction of our brains. And we set a fine example, didn’t we? Yelling insults at each other like a pair of banshees. I’m anxious as hell to get out of here. That’s the reality, my friend. Skip the poetry and metaphors.

BRYAN.  “Stuffed to the gills”—that’s not a metaphor?

DARROW.  Why not admit your precious Bible’s a just a sampler of metaphors? Why the hell does Jonah’s fish have to be a real fish?

BRYAN.  It’s real, all right. Stinks bad down here in its guts. (Pause) I had a dandy closing speech all ready for the jury. Too bad I never got to give it. “Science is a magnificent force,” I was going to say, “but it is not a teacher of morals.”

DARROW.  That is too bad. I agree with you.

BRYAN.  Do you, now? I thought evolution was your moral crusade.

DARROW.  Free speech is my moral crusade. Science is about knowledge, not morality.

BRYAN.  So much the worse for science. Where does Darwin teach brotherly love? Where does he say, as our Savior did, “Whatsoever ye would that men should do to you, do ye also to them”?

DARROW.  Shallow stuff. Notice the ulterior motive. Treat people right, and maybe they’ll treat you right. No altruism there. Same with “Judge not, that ye be not judged.” Jesus and Machiavelli aren’t so far apart. Kant got to the heart of morality a whole lot better.

BRYAN.  Oh, yes. The categorical imperative. Something to do with following a certain kind of maxim. A real mouthful, as I remember.

DARROW. “Act only according to that maxim by which you can at the same time will that it should become a universal law.”

BRYAN.  Well, the Good Lord’s presence has been scarce these last few days. Wonder what he’s up to? (Pause) Darwin may turn out to be right, after all. Read a bit of him once. Didn’t win me over, mind you, not by a long shot. But he seemed a decent sort of fellow with some worthwhile notions. Nice writing style too. I didn’t let him bother me much for a while. Then something happened.

BRYAN.  There was a war, remember? The whole world went mad. Millions of good boys died. And all because the Germans read their Darwin, studied up about the survival of the fittest. Oh, the “fittest”—the Germans figured that just had to mean them and their Kultur. So they replaced the Christian doctrine of love and renunciation with the Darwinian doctrine of hatred and force. Allmacht, they called it—the idea that war was a positive virtue, since the world was full of unfit folks who needed clearing out. Pretty soon, all civilization caught the Darwin bug and came pretty near committing suicide. When Wilson got ready to drag America into the mayhem, I skedaddled straight out of his cabinet.

DARROW.  A Secretary of State quitting in protest. I remember. I was impressed.

BRYAN.  There’s nothing Christian about a war.

DARROW. I didn’t like it either. (Pause) What was it you said? “Science is a magnificent force …”?

DARROW.  So you’ve got no intellectual objections to Darwinism?

BRYAN.  Well, according to you, I’ve got no intellect at all. But I’ve got moral objections as a compassionate man. For the life of me, I can’t see why you don’t too. When have we ever been at odds until these last few days? I was right with you on that Eugene Debs case; I always support the working man against the captains of industry. And I thought you were right as rain defending those Loeb and Leopold boys; I can’t abide executions even for bona fide monsters. And you’ve been on my side pushing for women’s suffrage and equality. It all makes good Christian sense to me. Jesus put no stock in big money, or legalized lynching, or keeping women in their place, or any other such thing. But my land, you’ve called me all kinds of names since this whole business got started! A bigot, a fanatic, and—what was it? Oh, yeah—“the idol of all morondom.” Odd things to say about a man who agrees with you straight down the line.

DARROW.  You want to snatch independent reason away from the common man, leave him with nothing but blind belief in some poor dumb slob nailed to a Roman gibbet. Now that’ll make the millionaire fat cats happy, won’t it? Lording it over a herd of meek, brainless cattle?

BRYAN.  You’ve got it backwards. The fat cats caught the Darwin disease. They think they’ve won their booty fair and square in the struggle for existence.  They think might makes right, it’s virtuous to poison our food, work our children to death, hoard our wealth.

DARROW.  You don’t have the first idea what you’re talking about. Why, you probably think evolution and Darwinian theory are one and the same thing.

BRYAN.  That’s way too subtle for me. 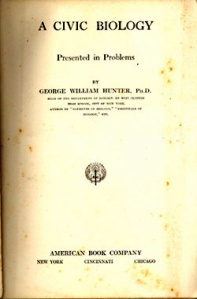 BRYAN.  Well, here’s your train. Oh, and here’s a little gift. A copy of that textbook Scopes taught from, Hunter’s Civic Biology. But I reckon you’ve already read it.

DARROW.  Only the parts about evolution. Have you?

BRYAN.  Bits of it. As the Lord would have it, it fell open for me on an interesting page. I marked it for you, think you’d find it interesting. This Hunter fellow seems to think we humans can be improved with some good old-fashioned selective breeding, like livestock. Says society’s “parasites”—criminals, the mentally slow, infirm, weak—ought to be locked in asylums, men and women kept apart so they can’t breed, can’t contaminate the race of the fit and able. I get the impression he thinks a better solution would be out-and-out extermination, but people are too bigoted for that, they lack the proper enlightenment.

(Pause as DARROW peruses the page)

BRYAN.  I’ll make you a deal. I’ll let you have your Darwin—in the classroom or anywhere else—if you can give me some kind of moral compass to save our nation and our world. But I don’t think you can do it. You soul’s all hollowed out.

DARROW.  The sooner humanity accepts the tragedy of God’s death, the sooner people’ll be decent to each other.

BRYAN.  That makes no sense.

DARROW.  How would you know? You’re not a sensible man.

DARROW.  I don’t have any hope, William.

BRYAN.  Search in your heart for faith, my friend.

DARROW. There’s no faith there.

BRYAN.  Well. We shall see what comes of all this.

BRYAN.  Have a good trip.

BRYAN.  I just stopped by to see you off. I’m staying in Tennessee a few more days.

DARROW.  This place will kill you.