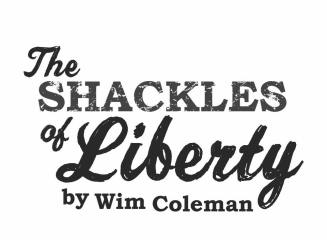 Q: What is The Shackles of Liberty about?
Set during the Thomas Jefferson’s last day in Paris, the play portrays the beginning of his lifelong relationship with Sally Hemings. It also deals with his involvement with the nascent French Revolution, his liaison with the brilliant portrait painter Maria Cosway, and an irony-charged confrontation with his rebellious teenaged daughter, Patsy.

Q: Why does this story matter? Why now?
In the wake of the tragic events in Charlottesville in August 2017, the Jefferson scholar Annette Gordon-Reed wrote a piece for The New York Review of Books entitled “Charlottesville: Why Jefferson Matters.” In it she wrote …

“Perhaps coming fully to grips with the paradoxes that Jefferson’s life presents is what being an American is about.”

I think that’s true. And I think that those paradoxes come most vividly into focus in the story of Thomas and Sally. It’s the story of an “apostle of liberty” who owned slaves, and of an oppressed young woman who dictated to him the terms of her own destiny. I think this pairing somehow captures what we are as a nation and a people. We need to understand them in order to understand the America that we inherited—an America of tragic failures as well as noble ideals, achievements, and aspirations. We need to understand Thomas and Sally in order to better understand ourselves.

Q: What are some of your aesthetic influences and techniques?
To borrow a phrase from Bertolt Brecht, my goal is to “make the familiar strange”—to portray iconic figures of American history in a way that provokes the audience to fresh thought, insight, and evaluation. Tactics used to achieve this include having Thomas Jefferson portrayed by a woman, non-realistic staging that splits Jefferson into his “public” and “private” personae, and a range of songs and music that metaphorically enlarges a single setting to suggest the three continents from which the play’s issues arise: Europe, Africa, and America.

Q: What kind of impact—artistic, intellectual, communal, civic, social, etc.—do you hope the play will have?
The Shackles of Liberty is rich in ideas about race, feminism, family, religion, politics, power, and historical change. In the same spirit as Broadway’s Hamilton, it delivers a healing message about the meaning of America. To me, the story of Thomas Jefferson and Sally Hemings is a kind of American creation myth. By delving into the heart of their story, I hope to encourage American audiences of all backgrounds to think of themselves as their descendants. Perhaps, by “making the familiar strange,” I can also make the strange familiar—to help release us from the otherizing that now rends American culture and society.

Q: What is the history of this play?
I have been working on this project off and on since 1978, when I first read Fawn Brodie’s groundbreaking biography Jefferson: An Intimate History. During these 40 years, I have honed my skills as a storyteller, educator, and historian by writing plays, poems, novels, and nonfiction books—many of them dealing with American history, including the writing of the Declaration of Independence. All the while I have been following developments in Jeffersonian scholarship, especially the work of Annette Gordon-Reed. The Shackles of Liberty is the culmination of an adult lifetime of thought, study, and creative effort.

Q: What awards and honors has the play received so far?
The Shackles of Liberty was performed by the University of Jacksonville Department of Drama in May, 2017. This workshop production and a $1,000 prize were awards for winning the Southern Playwrights Competition, which was open to writers in thirteen states. The play was also a semifinalist for the Eugene O’Neill Theatre Center’s 2017 New Playwrights Conference; one of two finalists of 2015 Maxim Mazumdar New Play Competition; a semifinalist for the 2016 Ashland New Plays Festival; a semifinalist for Road Theatre’s Summer Playwrights Festival 8, 2017; reached the second round for The Phoenix Theatre Festival of New American Theatre, 2017; and was one of the top 10 finalists for the Centre Stage Theatre’s 2018 New Play Festival.

The text of The Shackles of Liberty is available on the New Play Exchange or by contacting Wim personally.