The word happiness shows up a lot in my award-winning new play The Shackles of Liberty. This isn’t surprising, considering that one of its characters wrote some famous words about it.

For almost two and a half centuries, “the Pursuit of Happiness” has been a treasured ideal of American life. We’re so used to the words that we’ve forgotten what they meant in 1776. At the time, some people thought that the very notion of an inalienable right to the Pursuit of Happiness was downright ludicrous. An anonymous British writer let fly with this burst of ridicule …

Did any mortal alive hear of taking a pursuit of happiness from a man? What they possibly can mean by these words, I own is beyond comprehension. A man may take from me a horse or a cow … but how that can be taken from me, or alienated, which I have not, must be left for the solution of some unborn Oedipus.

Jefferson’s intellectual hero John Locke wrote about the natural rights to Life, Liberty, and Property. In borrowing Locke’s phrase, why did Jefferson change a seemingly brass-tacks concept like Property to something vague and fuzzy like the Pursuit of Happiness?

The truth was that the concept of happiness was hardly vague or fuzzy at all in the late eighteenth century. It was as palpably meaningful as life and liberty. In An Essay Concerning Human Understanding, John Locke himself called the Pursuit of Happiness “our greatest good” which “our desires always follow.” 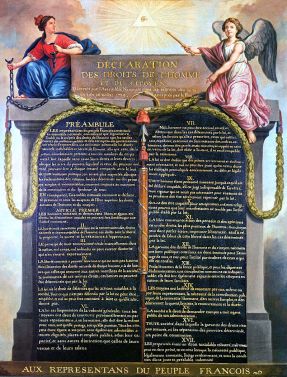 The Declaration of the Rights of Man and of the Citizen, 1789

Jefferson believed that the perpetuation of happiness was a fundamental purpose of government. In my play, Jefferson proposes this idea to a delegation of French Patriots while helping them draft the Declaration of the Rights of Man and of the Citizen in 1789 …

May we not seize this opportunity to enshrine le bonheur, la félicité, happiness not merely of the one but of the many, the greatest happiness for the greatest number, as the first law of government? Happiness as a widening spiral, an ever-expanding sphere, a blessed contagion, infecting all of the body politic?

Happiness also figured into the science of Jefferson’s time. Although he didn’t write anything about evolution that I know of, I’d be very surprised if he never gave any serious thought to it, at least later in his life.

Charles Darwin’s On the Origin of Species wouldn’t be published until 33 years after Jefferson’s death. Even so, the idea of evolution was already in the air. In 1809, the French naturalist Jean-Baptiste Lamarck formulated a theory of evolution that held sway until it was superseded by Darwin’s theory of Natural Selection in 1859.

But Jefferson was more likely to be aware of the evolutionary ideas of Charles Darwin’s grandfather Erasmus Darwin. An almost unbelievably brilliant polymath, Erasmus Darwin was a friend of Benjamin Franklin and Jefferson’s mentor William Small. He started writing about evolution in 1789, the year in which The Shackles of Liberty takes place.

Happiness had special meaning to Erasmus Darwin. As his biographer Desmond King-Hele put it, his theory of evolution was in some ways a theory of “the survival of the happiest” …

Darwin believed that all creatures and plants enjoy life, with the most complex animals having the greatest capacity for enjoyment. When a creature dies, often because it is no longer capable of happiness, it gives pleasure to a myriad of smaller creatures, so that the sum of happiness is maintained, or increased.

For a time, Erasmus Darwin was considered the greatest living English poet. So I think it quite possible that Jefferson read his posthumously-published poetic masterpiece The Temple of Nature. If so, he surely relished its soaring lines about the Pursuit of Happiness …

(The Shackles of Liberty is the winner this year’s Southern Playwrights Competition, sponsored by Jacksonville State University.)

One comment on “… Life, Liberty and the Pursuit of Happiness …”