… but what is the question, really? What is Hamlet actually talking about? I was pretty slow as a teenager, so when I asked a high school English teacher this question, of course he told me, as teachers always do …

The trouble was, I couldn’t quite make sense of it. Yes, I understood what all the words meant—that “quietus” was a settlement of a debt, a “bare bodkin” was a dagger, “fardels” were burdens or loads, the “undiscover’d country” was death, and all the rest of it. 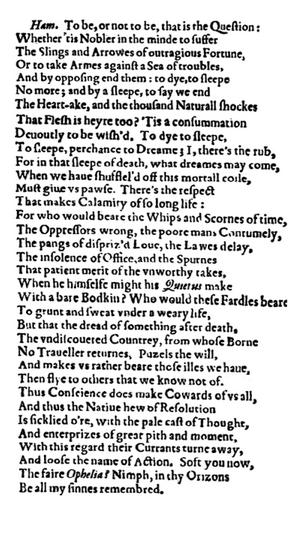 But wasn’t taking “arms against a sea of troubles” a rather odd way of describing suicide? And what about those “enterprises of great pitch and moment” that “lose the name of action” that Hamlet talks about at the end? Surely, I suggested, Hamlet wasn’t talking about suicide there.

I succeeded only in convincing my English teacher that I was a great deal dumber than he already knew me to be. And who was I to argue? I let the matter rest for a long time.

It wasn’t until many years later that I discovered the 1982 Arden edition of Hamlet, edited by the late Shakespeare scholar Harold Jenkins. Thirty years in the making, it was so exhaustively (and exhaustingly) annotated that Jenkins couldn’t fit all of his annotations on the pages of the text itself; he added another 150 pages of notes at the end. It was a dream for a Shakespeare geek like me. I devoured every word.

And when I got to that all-too-famous soliloquy of Act III, scene i, I was in for a special treat. The speech was annotated first with about a page and a half of footnotes, then with another eight and a half pages of endnotes—a total of around 10 pages of annotation altogether.

To my delight, I found that Jenkins devoted most of those notes to proving my high school teacher (and just about everybody else) wrong …

It is impossible … to say that Hamlet ever contemplates suicide for himself or regards it as a likely choice for any man.

For one thing, this is the only soliloquy of Hamlet’s (out of seven in all) that never once uses first person singular pronouns like “I” and “me.” Nor does he mention his father’s murder, his uncle’s usurpation, his mother’s remarriage, or anything else having to do with the story of the play. Hamlet isn’t talking about his own specific situation at all, but about what life is like for all of us.

And his “question,” as Jenkins sums it up, is simply, “Is life worth living?” Hamlet goes on to give us a lot of reasons why life might not be …

… the whips and scorns of time,
Th’oppressor’s wrong, the proud man’s contumely,
The pangs of dispriz’d love, the law’s delay,
The insolence of office, and the spurns
That patient merit of th’unworthy takes …

And of course, right then Hamlet does mention the possibility of suicide—after all, one could always do oneself in with a “bare bodkin.” But according to Jenkins,

this is a rhetorical question, which already presupposes its answer, a hypothetical question brought in only to be dismissed.

It’s the same with just about any positive action we might take. We don’t wind up doing much of anything about life’s “sea of troubles.”

And according to Jenkins, that “sea” is a richer image than we may have realized: 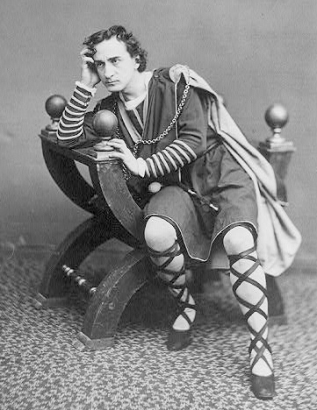 The metaphor appears to be based upon well-known instances, notably that of the Celts, who, as described by various ancient authors, rather than show fear by flight, would draw their swords and throw themselves into the tides as though to terrify them.

A desperate and futile gesture, certainly. You could even call it suicidal, since it’s surely not going to end well. But suicide isn’t really the point. It’s about doing something—anything—against the manifold torments of existence. It’s also about accepting the fact that you’re doomed to lose—or at the very least to die in the attempt. Hamlet learns this bitter truth himself at the end of the play.

Most of us don’t dare undertake any such endeavor, in no small part due to our fear of the “undiscover’d country” of death …

Thus conscience does make cowards of us all,
And thus the native hue of resolution
Is sicklied o’er with the pale cast of thought,
And enterprises of great pitch and moment
With this regard their currents turn awry
And lose the name of action.

As Jenkins puts it,

One comment on “THAT Soliloquy — Is It About Suicide?”