“Did you know that acquired characteristics can be inherited?”

My daughter dropped that little bombshell on me one day after she came home from school.

“What kind of crap are they teaching you in that biology class of yours?” I grumbled.

“It’s called epigenetics,” she replied. “Look it up.”

In previous posts, I wrote about Bernard Shaw’s attempt to found an evolution-based religion called Life Force Worship. Shaw’s ideas were based on the pre-Darwinian theories of Jean-Baptiste Lamarck. Here’s an admittedly crude and cartoonish rendition of the Lamarckian Story:

Once upon an extremely long-ago time, a certain hoofed animal ate all the leaves within easy reach. It then got into the habit of stretching its neck in order to eat leaves higher up. It passed along both the habit and an ever-so-slightly more elongated neck to its offspring. And lo, after untold generations of habit and inheritance, we now have giraffes in our midst. 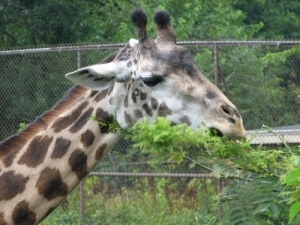 Darwin’s theory of Natural Selection. Alas, according to this new idea, giraffes did not develop long necks solely through exercise and effort—by willing it, so to speak. Instead, giraffes lucky enough to be longer-necked managed to survive and procreate in the life-or-death struggle to reach higher leaves.

The process seemed (at least to thinkers like Shaw) to be intolerably random and mindless. Nevertheless, Lamarckism was relegated to the dustbin of defunct ideas—or so it was long thought.

I won’t try to explain how epigenetics works. I doubt that I’ll ever be able to wrap my own brain around it. The gist of it seems to be that, while our genes are pretty much inalterable, the expression of those genes is not. Moreover, acquired characteristics sometimes can be inherited. As Kara Rogers writes in Scientific American,

the implications so far suggest that our lifestyles and what we eat, drink, and breathe may directly affect the genetic health of our progeny.

What’s more, epigenetics may well offer possibilities for treating obesity, cancer, diabetes, addiction, aging, mental disorders, and all sorts of other bugbears of the human condition.

So has this new science given Lamarckism a new lease on life? There’s a lot of healthy skepticism out there. And I doubt that any serious epigeneticist is ready to claim that giraffes willed themselves into having longer necks. But epigenetics certainly looks like an inspiring plot point in the ever-evolving Story of life.

2 comments on “Back to Lamarck?”